The DoubleTree Suites by Hilton has long been located at the intersection of 7th Avenue and West 47th Street. But in a few more years, the soon-to-be former hotel will house Times Square’s newest project, a nearly $2.5 billion redevelopment by L&L Holding Company, Maefield Development, and Fortress Investment Group. With the site purchased for $450 million, they plan to demolish the existing hotel and create a new 550,000 square foot and 46-story skyscraper, dubbed TSX Broadway. Plans also integrate the 105-year old Palace Theater. Approved by the Landmark Preservation Commission in November 2015, the historic structure will be lifted from its foundations and placed 30 feet above street level. 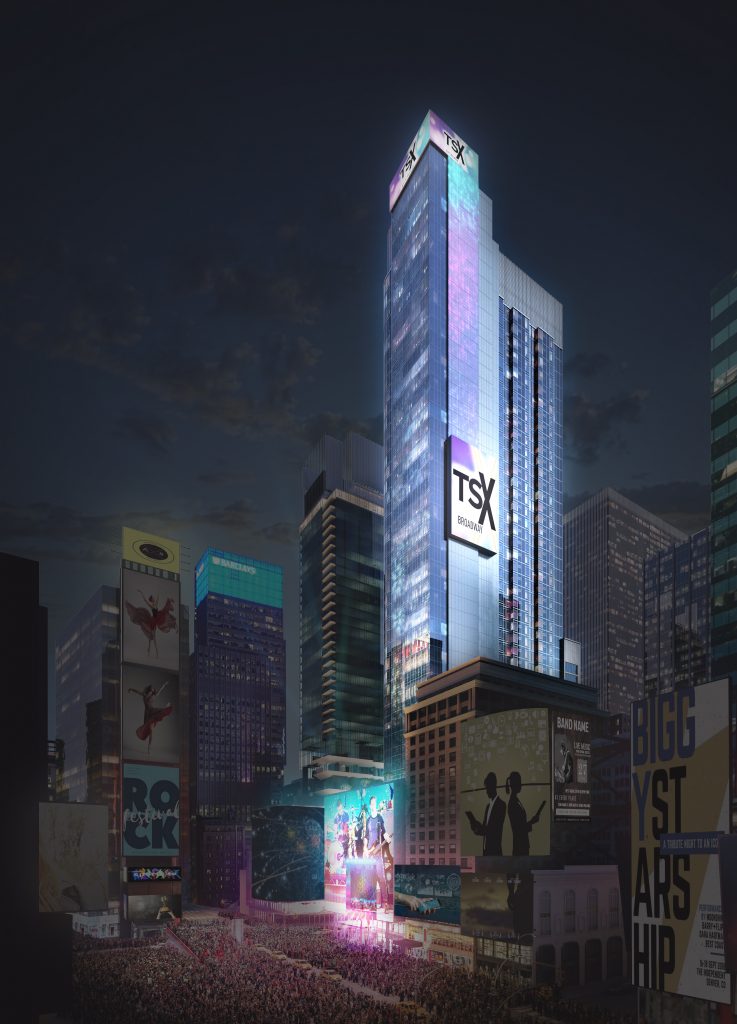 The audacious engineering plan is part of the developer’s strategy to create a new marketing and retail platform, quite literally, to appeal to a larger international audience with the latest in advertising technology and new experiential strategies in the realms of retail, dining, and hotel space.

From ground level, tourists and visitors will enter through the 100-foot storefront and come through the 15,000 square foot retail space on the first floor. Going up are the nine floors of additional retail totaling 75,000 square feet. Along West 47th Street, a separate entrance to the dining portion of TSX Broadway  will be created, spanning 30,000 square feet and marked with a 90-foot exterior sign. 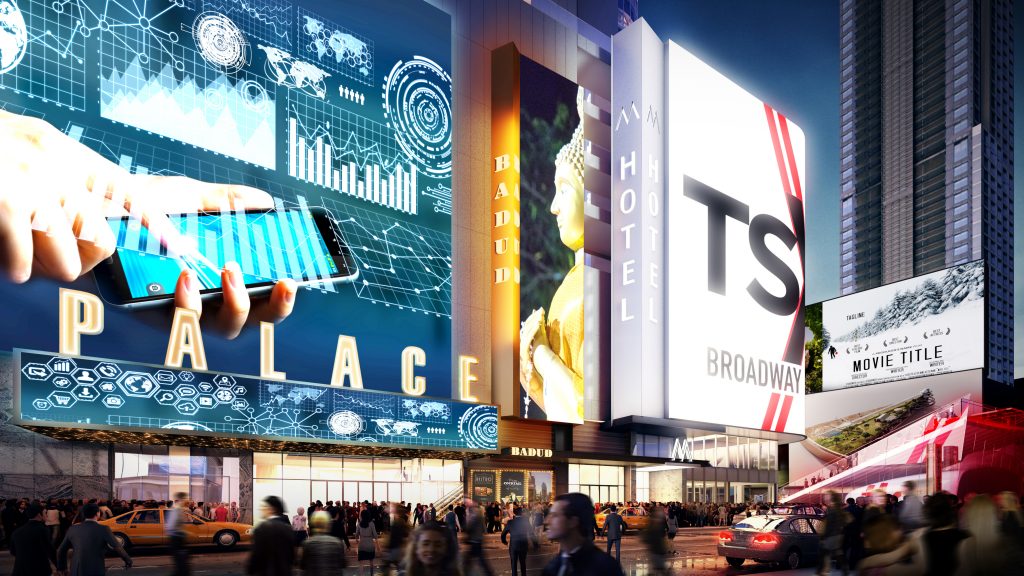 The side entrance to the dining at 1568 Broadway along West 47th Street, rendering courtesy of L&L Holding Company

The third floor will have a permanent public outdoor platform which will cantilever over the sidewalk along 7th Avenue 30 feet in the air, across from the TKTS red stairs. It will be suspended among a massive 18,000 square foot LED screen that wraps around the corner of the tower’s 10-story podium. This will also be the main floor to the Palace Theater when lifted to its final elevation. 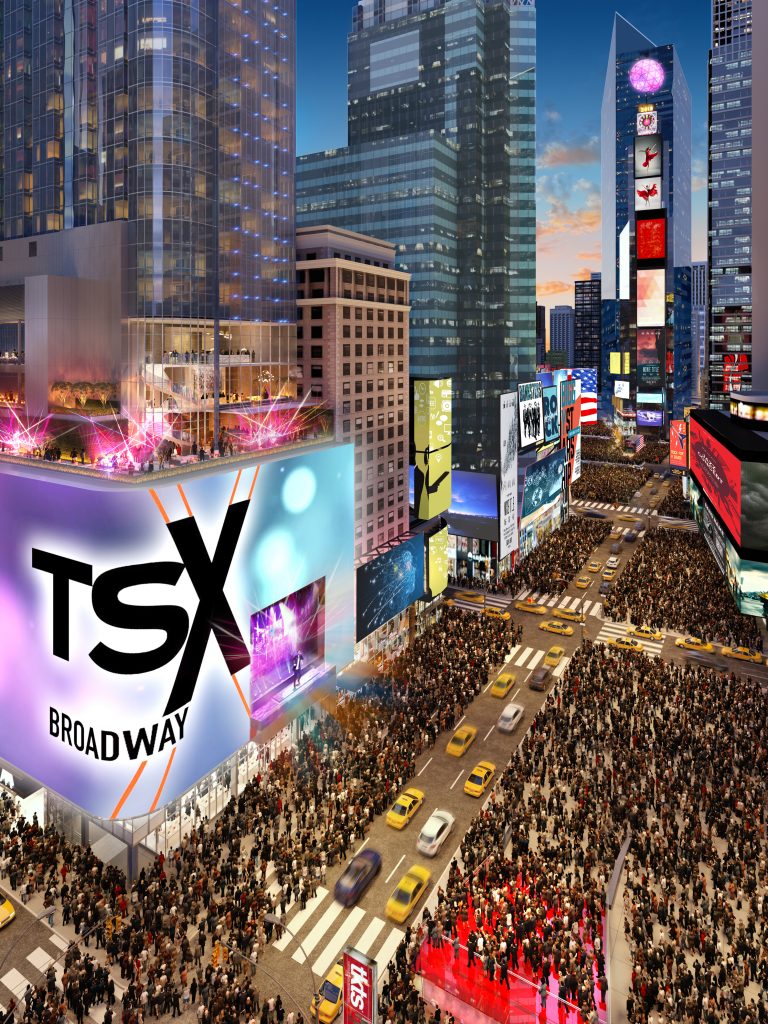 An outdoor terrace dedicated to food and beverage space and measuring 10,000 square feet will be situated above the LED signage, becoming the largest space of its kind in Times Square. The views overlooking Father Duffy Square and the rest of the crossroads will be expansive and immersive. The rest of the building will house a 699-key hotel with several dozen rooms even featuring floor-to-ceiling windows. The upper floor will house “Ball Drop Suites,” thusly named due to the visual alignment of the New Years Eve ball from up above the crowded streets during the annual celebration.

A cut sectional view of the retail portion at 1568 Broadway, one of two options, rendering courtesy of L&L Holding Company

A cut sectional view of the retail portion at 1568 Broadway, one of two options, rendering courtesy of L&L Holding Company

“The future of Times Square will be shaped by its ability to maintain a lasting tradition of innovation and creativity. The area’s existing real estate is not equipped to host global brands with the most innovative technology. Through a dramatic intervention, TSX Broadway will replace an aging hotel and sub-par retail with a state-of-the-art, experiential global branding platform in the heart of Times Square, the most visited pedestrian destination on earth.”

Andrew Essex, Founding CEO of Droga5 and author of The Death of Advertising: Why it Had to Die and the Creative Resurrection to Come, also added:

“This incredible project will be transformative for the advertising, marketing and retail industries. It combines all the key elements that brands are required to consider in today’s marketplace. TSX Broadway will be the only full-building brand platform – located in the most powerful advertising market in the world.”

As demolition of the Double Tree Hilton begins in a few more months, the 1,700-seat Palace Theater will be preparing its $50 million renovation. The interiors will all be restored along with the integration of new structural components as the new building begins to go up around it, above and below. Click here to read more about the extensive undertaking plan to lift the theater.

No official completion date for TSX Broadway has been announced, but sometime after 2020 is most likely.