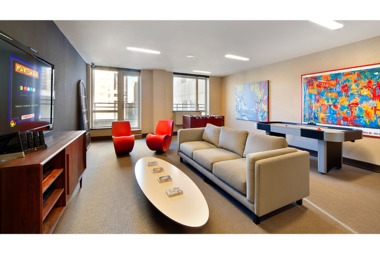 MANHATTAN — Having a children’s playroom for tenant use — for the elementary school set and younger — has been a standard amenity in new developments for more than a decade. But now developers have realized that if they want to attract families and keep them longer, it’s all about providing what tweens and teens want.

Mini arcades, study rooms, kids fitness rooms and even a soundproof music studio where kids can jam without their parents worrying about offending their neighbors are just a few of the amenities on the rise in luxury buildings that have been increasingly catering to older children, experts told DNAinfo New York.

“It used to be that everyone left by the time their kids were in second grade and the five-bedroom colonial in Greenwich [Conn.] was the ‘I made it’ kind of statement,” said Douglas Elliman’s Darren Sukenik. “Now it’s the three- or four-bedroom in TriBeCa, and people are doing everything imaginable to stay.”

And a children’s playroom only gets you through a few years, he said.

“The teens are here to stay, and the teen lounge is the now the suburban backyard,” he said.

Here are some of the ways developers have been pumping up their offerings for the tween and teen set.

Without a garage or basement, many city kids grow up without a place to hook up amps, set up a drum kit and play with abandon.

The Brooklyn Trust Company — a 12-unit luxury condo on Pierrepont Street in Brooklyn Heights that launched sales this October —aims to let residents let loose in its sound-attenuating music practice room for teens (and others) to use.

The room, which is separate from the condo’s children’s playroom and teen room, holds a Yamaha keyboard, music stands and adjustable stools.

The Stahl Organization, which developed the building — where three-bedrooms currently start at $3.329 million — claims this music room is the first of its kind in a Brooklyn building.

2. Old-school games are all the rage.

Video games paying homage to the ‘80s and ‘90s and old-school games like foosball and ping pong appeal to parents, too, giving them a built-in activity with their kids, said Emily Sertic, the director of sales at 111 Murray St., a new TriBeCa condo with a teen lounge.

The 157-unit in TriBeCa that hit the market in September — with prices ranging from $1.52 million for a studio to $18.9 million for a 5-bedroom — has a 1,692 square foot rec room devoted to teens, with vintage arcade games, including pinball and skee ball.

With the nostalgia factor for parents, these activities become “an alternate option for adults and teens or tweens that maybe aren’t so connected,” Sertic said.

Several Upper East Side buildings also have such lounges, like 20 East End Ave., a new 18-story building at East 80th Street, with a 500-square-foot “Junior Lounge,” aimed at kids between 7 and 16 years old.

The building — which started selling condos this fall, with prices ranging from $4.535 million for a two-bedroom to a $35 million five-bedroom penthouse — is stocking the lounge with board games, arcade games like Ms. Pac-Man and Centipede, as well as a foosball table and a mini-basketball table.

3. Gaming consoles are must-haves, too.

Though plenty of parents try to limit screen time, many are realistic about their tweens and teens’ desire to play video games in their free time — and luxury developers are offering space for gaming as an enticement.

The Junior Lounge at 20 East End Ave. has three 65-inch flat screen TVs equipped with gaming consoles and the latest versions of PlayStation and Xbox One.

And the teen rec room at 111 Murray St. has a Wii platform as well as a separate area for watching movies so that the two activities don’t interfere and there’s no fighting for TV control.

At Circa Central Park, a condo expected to open next January at 285 West 110th St., at Central Park West, there’s a gaming console in the 516-square-foot teen room.

But the building is also trying to do its part in encouraging kids to get outside. Residents will have access to remote-control sailboats, bikes and picnic baskets to rent when going to Central Park across the street.

While several new buildings are dedicating precious square footage to basketball courts, 50 West, one of the Financial District’s tallest residential towers, is upping the ante with a kids’ fitness studio.

The separate place for kids won’t disturb adults who are trying to focus on weight training or cardio in adjacent rooms.

The building’s team has been in talks with American Leisure, a company that operates sports facilities, to incorporate activities such as basketball, volleyball, jump ropes and hula hoops to encourage physical activities for kids of various ages. The condo — which is expected to be finished this year — is also planning to offer classes like karate, dance classes, capture the flag and dodge ball, as well as time for more casual play between both children and adults.

Near Circa Central Park’s gaming room will be a separate “study lounge” for bookworms, outfitted with iMacs. Near the Brooklyn Trust Company’s music room is the teen room, also being billed as a place for study sessions.

Families are increasingly interested in work space — for parents working from home and their kids, said Auguste Olson, a broker with the Level Group.

“Some families may have bedrooms that are shared by multiple children of variable ages, making studying challenging to older children in need of dedicated quiet space,” she noted, adding, “Especially in the winter months in New York, you don’t want your tween walking around in the city, but you don’t want them in the living room.”