While the Durst Organization cannot take full credit for establishing Manhattan stretches like Third Avenue in the 1950s, the Avenue of the Americas in the 1970s and Times Square in the 1990s, its vision helped revive them. By erecting office towers in those districts, it stretched the bounds of what was a respectable Midtown address. 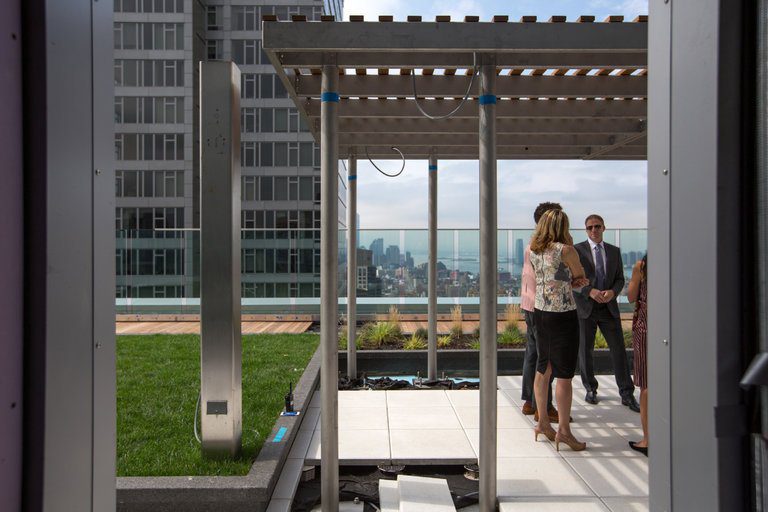 One boundary that Seymour Durst, the second-generation patriarch of the business, always longed to push was the south.

“My father felt Sixth Avenue had more room to grow,”

Douglas Durst, his second son, said in an interview. It fell to Douglas Durst and his own daughter, Helena, to realize this vision, as they have just completed work on a 47-story tower on the corner of West 31st Street.

The building, Eos, at 855 Avenue of the Americas, is expanding New York’s most central business district while employing an increasingly common practice throughout New York, and the world. As land grows scarcer and more expensive, and the population booms, more developers are combining commercial and residential space.

“It’s getting harder and harder to do office construction,” Ms. Durst said during a recent tour of the tower. “Housing is so much more valuable now, even in Midtown, it’s taking over.”

Joining the divergent strands of the family’s business — offices and housing — is a first for the Dursts.

Not that they had much choice. The company, which historically focused on office development, shifted toward housing in the last two decades. Surging land prices, a lack of large sites and an influx of wealthy out-of-town house hunters has meant those Fortune 500 addresses along the avenues and especially 57th Street have given way to slender apartment towers.

Meanwhile, the job market has improved, creating demand for new office space, though it cannot quite keep up with housing.

With space running out in sought-after areas, what better solution than to stack one atop the other? In the case of Eos, this means about 375 rental apartments over 122,000 square feet of office space and 49,000 square feet of retail space.

Mixed-use development has long been a dream of city planners, who see it as a way to promote density, a crucial need as cities worldwide continue to swell.

Crowding is what first dispersed these uses in New York, just as it is now bringing them back together. In the early part of the 20th century, the growth of dirty garment factories around the expensive shops and fine residences of Fifth Avenue spurred the creation of the zoning code, and commercial and residential spaces became more segregated.

Decades later, officials and developers across the five boroughs see multiuse projects as a way to strengthen neighborhoods and reduce strains on infrastructure. Whether finding space for manufacturing among the apartments sprouting on an old industrial waterfront or turning the derelict upper floors of the Fulton Mall into tech hubs, builders are scouring the city for ways to do more with less.

Helena Durst, chief administrative officer of the Durst Organization, at 855 Avenue of the Americas. Joining the divergent strands of the family’s business — offices and housing — is a first for the Dursts. Credit Santiago Mejia/The New York Times

Asia has been a leader in building such complexes, some of which are effectively cities within cities. Three of Tokyo’s tallest towers — each exceeding 780 feet — house offices, shops and restaurants, and are topped by condominiums and hotels. The world’s tallest building, 2,717-foot Burj Khalifa in Dubai, United Arab Emirates, has a similarly eclectic mix of apartments, offices, hotel rooms and attractions.

“The economics of these buildings can be difficult,” said Vishaan Chakrabarti, the founder of Practice for Architecture and Urbanism. “They say as much about the culture of construction as the culture of the people in these megacities.”

Some of the most successful mixed-use developments in New York have been around the bustling Asian community of Flushing, Queens. There, the 14-acre Sky View Parc combines an 800,000-square-foot mall with 36 outlets, medical suites for 32 practices and four apartment towers on the roof with more than 900 units; the roof doubles as a four-acre garden. The 1.8-million-square-foot Flushing Commons is under construction, with 600 apartments, and shops, office space and a Y.M.C.A.

Such developments are not unheard-of in Manhattan, though zoning quirks tend to stifle variety. One of the earliest modern examples of mixed-use development is Trump Tower.

When shops began fleeing Fifth Avenue in the 1970s, the city permitted developers, who preferred to construct housing, to build bigger structures if they included commercial uses. This allowed Donald J. Trump to create a five-story atrium that is home to Gucci’s flagship store, as well as many campaign rallies for Mr. Trump, the Republican nominee for president. Above the atrium are 26 floors of offices and 39 floors of apartments.

More recent examples include the 72-story CitySpire, built in 1987 on West 56th Street, where the first 23 floors are dedicated to offices; and the Bloomberg Building on Lexington Avenue, which houses the headquarters of the financial news service.

There may, however, be a disconnect between downstairs businesses and billionaire tenants. “Do you really think people like Steven A. Cohen are shopping at the Home Depot,” Mr. Chakrabarti said, referring to the hedge fund manager whose penthouse at the Bloomberg tower was once on the market for $115 million.

The Dursts did not always plan to create a mixed-use building.

In 2010, the Durst Organization, in partnership with Fetner Properties, bought the debt then foreclosed on the 855 Avenue of the Americas property, then owned by the Brooklyn developer Joseph Chetrit. For two years, the developers considered building a hotel, but eventually turned to Seymour Durst’s office space idea. Fetner is no longer involved in the project.

“When we first started this project, people thought we were crazy to include office space,” Ms. Durst said.

Since then, the Midtown South office market has improved, as Google and dozens of other tech companies have transformed old lofts and department stores in Chelsea, the Flatiron district and Ladies’ Mile into the heart of the city’s tech sector.

Last year, Nike agreed to rent all of the 122,000 square feet of office space on the second through sixth floors.

Befitting the location, the offices are a cross between the modern amenities of Midtown and the cavernous lofts to the south. Because of a zoning quirk, about 30 percent of the third and fifth floors could not be built on. Durst’s architect, Cookfox, turned this into an advantage, creating spaces that soar 32 feet and give an airy feeling hardly found even in the converted lofts so popular now. Four modern saw-toothed skylights like those in old factories top one roof. Nike is considering using the area as a showroom and events space. The building’s sixth-floor setback — a more common feature of a Midtown tower — has been given the contemporary treatment of an outdoor terrace for workers.

Residents and workers have separate lobbies, elevator cores and terraces. Both sets of tenants do share at least one thing: the basement gym. There, Nike is working with the Dursts to build a basketball court and outfit gym equipment so professional athletes can test new gear in the same spaces frequented by weekend warriors and part-time yogis.

“You need treadmills that go a lot faster,” said Julia Limongello, the project manager for Eos, as she stood in the unfinished gym over the summer. “You’ll see a lot more 50-pound dumbbells.”