We are excited to announce that two U.S. Immigration Fund projects, The West Hollywood Edition Hotel and Residences in Los Angeles and the Times Square Edition Hotel in New York were both just ranked as the best hotel openings in the United States for 2018. Read more to see the best hotel openings in the U.S. from New York to Nashville, Miami Beach to Montana. Expect everything from hip, design-led hotels with hot restaurants in major cities, to far-flung rural lodges near national parks.

A guide to the best new hotel openings across the United States in 2018, from New York to Nashville, Miami Beach to Montana. Expect everything from hip, design-led hotels with hot restaurants in major cities, to far-flung rural lodges near national parks. The EDITION brand is ready to make its mark on the west coast with its latest outpost in West Hollywood. Inside, the hotel will be home to 190 guest rooms, as well as 20 luxury two-to-four bedroom residences. There will also be a restaurant, a spa, a lobby lounge and a nightclub/bar venue. Come the scorching LA summers, the rooftop pool will be a tip-top hangout; it’s plenty large for a proper dip and is flanked by greenery and flora. When the EDITION opens on Times Square, it will have a whopping 452 rooms with four different levels of public spaces, including a performance venue and a high-end fitness centre. The rooftop’s expansive – and verdant – beer garden will also boast impressive views over Times Square. Talk about a central location.

• The best hotels near Times Square 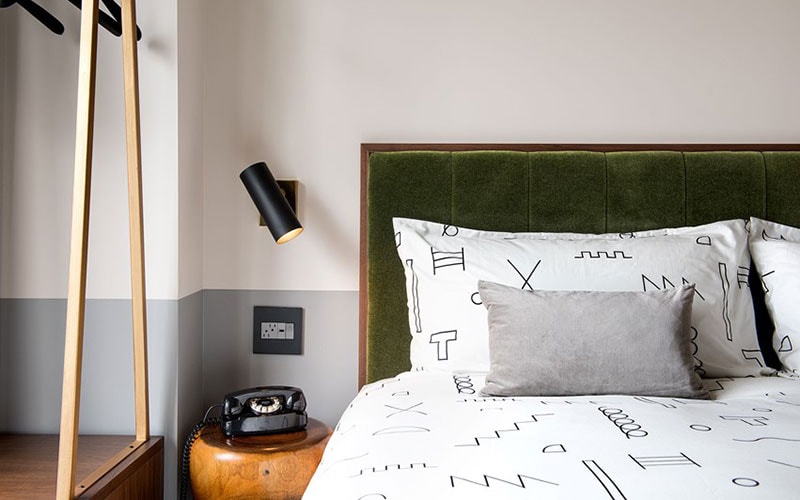 The Hoxton’s first US hotel opening has generated a lot of hype, and rightly so. Bedrooms carry the brand’s trademark minimalist design and are decorated with plenty of local touches – think handmade ceramics, shelves filled with books chosen by NY residents and bespoke patterned bed linen from Brooklyn homeware label Dusen Dusen. The Williamsburg location should hardly come as a surprise, knowing that The Hoxton group likes to opt for creative areas – this neighbourhood is where many of the city’s artists and chefs live. We’re betting they’ll all be flocking to the hotel’s rooftop bar with views of Manhattan come summer. The standout feature of this chic and fun Ocean Drive newcomer has got to be its rooftop, glass-bottomed pool. Inside, three Art Deco buildings have been combined to offer 132 guest rooms – 82 of which will boast ocean views. The vibe is pared-down 1940s Miami beach glamour: expect plenty of pastel colours, oversized potted plants, quirky art and patterned cushions. There’s also going to be another outdoor pool, a coastal Mediterranean restaurant and a slinky Spanish tapas bar.

• The best hotels in Miami Beach 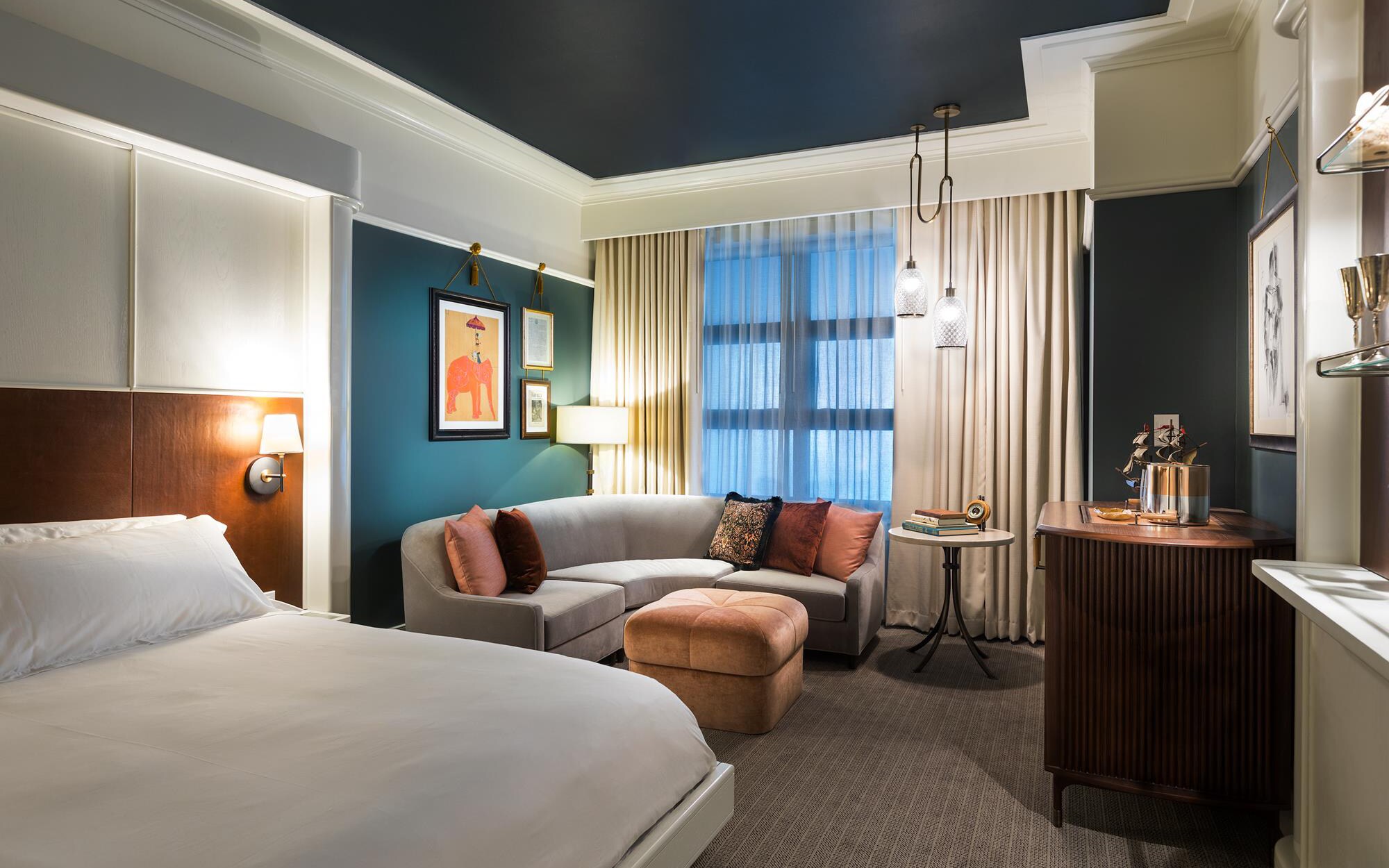 This swish hotel will bring a new wave of attention to the elegant city of Savannah when it opens its downtown doors this spring. All 167 rooms are decked out in soothing colours with Frette Italian linens, Byredo bath products and a minibar. Many include cosy nooks and wraparound sofas for reading and relaxing. Look out for the quirky, local art on the walls and tableside trinkets like boat models and vintage barometers. Communal spaces such as the cheese and wine ‘market’ and the rooftop pool bar are just the ticket for pre-dinner drinks.

• The best hotels in Georgia 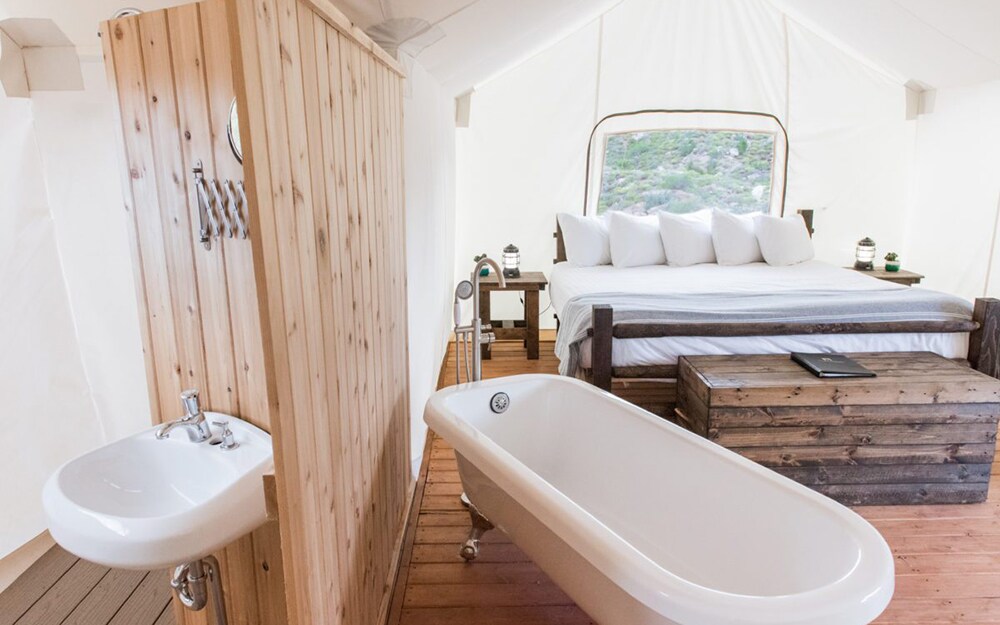 These safari-inspired canvas tents lie just 10 minutes away from Mount Rushmore, and most importantly, they succeed in striking the balance between embracing the great outdoors and providing hotel luxuries. Many come with king-sized beds, en-suite bathrooms (some with freestanding tubs), wooden flooring and private decks. Opt for the Stargazer and you’ll be able to pick out The Big Dipper from the viewing window above your bed. There will also be a restaurant, and plenty of activities ranging from gold panning to horseback riding.

• The best hotels in the United States 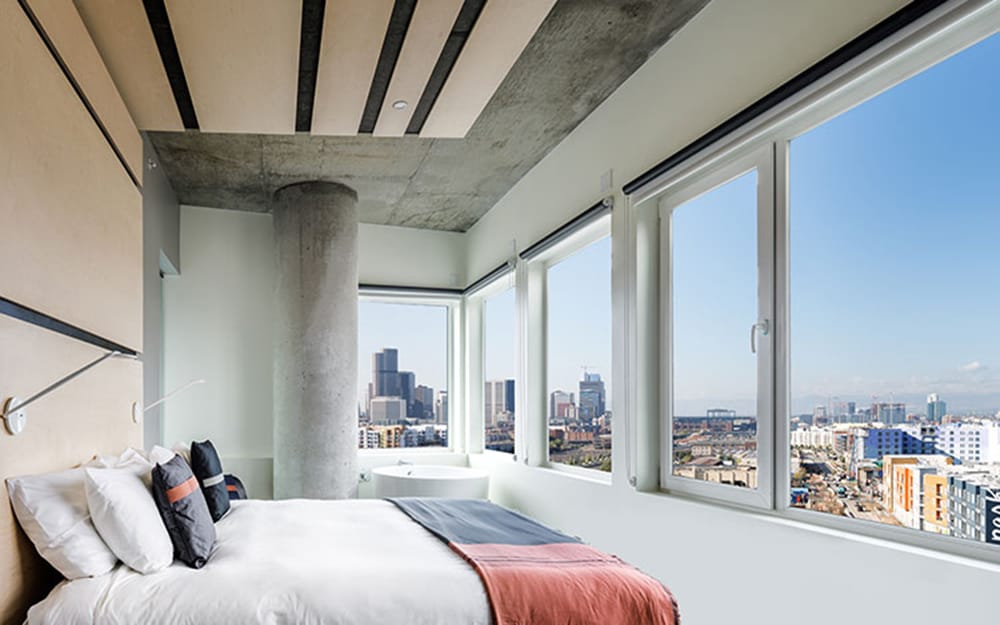 This hotel is opening next to – and as an extension of – Denver’s much-loved food market Source, where 25 different vendors operate (think Mexican street food and creative cocktails). Upstairs, there will be 100 light and bright rooms with polished concrete floors – some with views of the Rocky Mountains. Minibars are a selection of what’s on offer downstairs, and the silk-screened Source tote bag in your room comes in handy when shopping for gourmet souvenirs. A rooftop gastropub, beer garden and pool terrace completes the offering.

• The best hotels in Denver Say hello to this new Southern belle. Hotel Bennett will feature grand floral displays, designer pedestal tubs, a sleek spa, elegant fabrics and dramatic chandeliers. An ornate lobby with double staircases gives way to sophisticated rooms that have a classic beauty to them. Picture a muted colour palette, accents of gold and marble bathrooms. The hotel’s downtown location means it’s easy to wander most places in the city, and the views from the rooftop bar are charming. Do pause for afternoon tea in the Camellias lounge – it’s clad in antique pink stone, restored from when the building was the Charleston Library.

• The best hotels in South Carolina 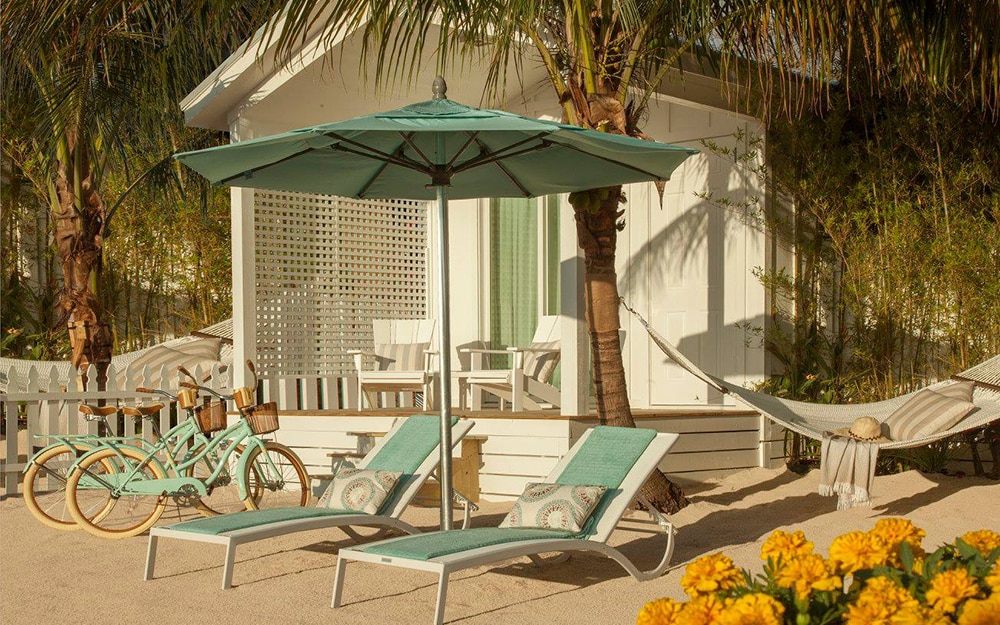 Embrace the Key Largo cabana lifestyle in your very own white wooden bungalow. The Key’s latest all-inclusive, adults-only resort has beachfront and island options; both are a swathe of white, cream, grey and pastel hues. Coastal embellishments like coral-patterned cushions, large seashells and framed turtle photos add to the calming atmosphere. Other touches include the private verandas with sleek white soaking tubs, mint-green beach cruiser bicycles, and wide-netted hammocks swaying between the palm trees. To up the relaxation ante even further, there’s morning yoga on the beach, an oceanfront infinity pool and Zen Garden Spa with outdoor treatment rooms.

• The best hotels in Key Largo The aesthetic of the 50 rooms at The Ramble Hotel is vintage with a thick layer of gloss. There may be wide-plank hickory flooring, antique Persian rugs, factory-paned windows, piles of old books and interesting art – but it’s all done in a stylish, planned-down-to-the-tee way with modern-looking chandeliers, plush pillow-top mattresses and chic block-colour headboards mixed in. New York cocktail bar Death and Co will take over the lobby to serve tantalising tipples, and will also select the drinking options for the in-room minibars.

• The best hotels in Colorado 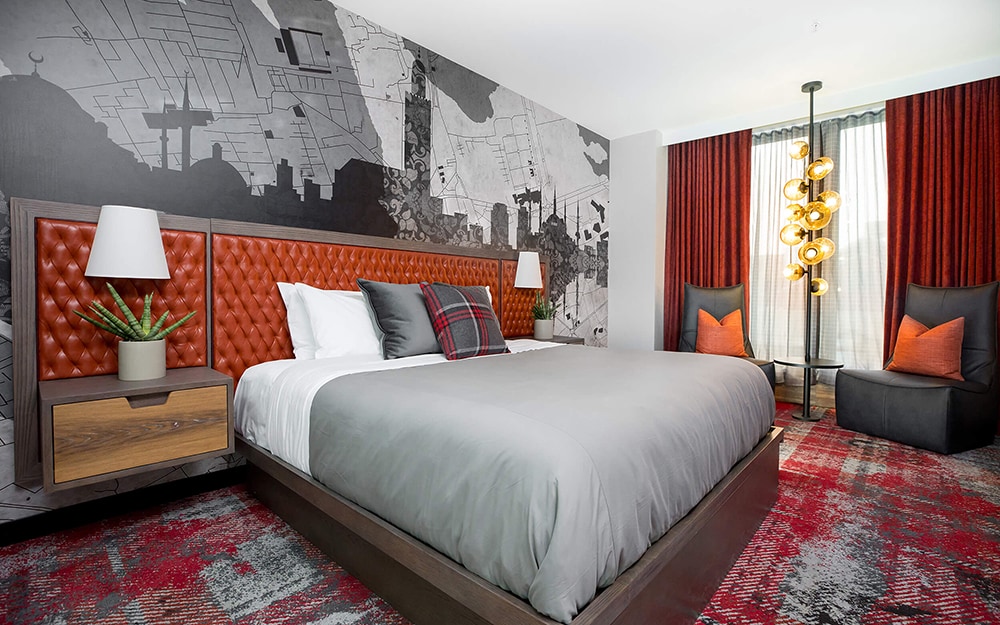 The Bobby Hotel certainly won’t be making a shy entrance onto the Nashville scene – its bold personality spans quirky interior design to statement drinking establishments. Up top, there’s a rooftop lounge and pool with views over Music City, but it’s the 1967 former Greyhound bus that was lifted up here and fitted out for late-night parties that will really catch your attention. Downstairs, there’s dive-bar Bobby’s Garage and a lobby with modern chandeliers and funky furniture. Expect plenty of patterns when you do finally make it to bed, as well as cool urban lighting fixtures and leather headboards.

• The best hotels in Nashville The California coastline is dotted with private beach homes – and with the addition of Lido House, you can finally feel like you have your own pad. The exterior has a distinctly Cape Cod-style aesthetic, and inside the rooms, the nautical vibes are on point. Think navy blue hues, striped carpets and cushions and seaside-themed photographs. There are also five cottages with their own rooftop deck and barbecue. Elsewhere, you’ll find Newport Beach’s only rooftop bar, a seafood restaurant, spa and saltwater pool with private cabanas and champagne cart service. Cheers to that.

• The best hotels in California 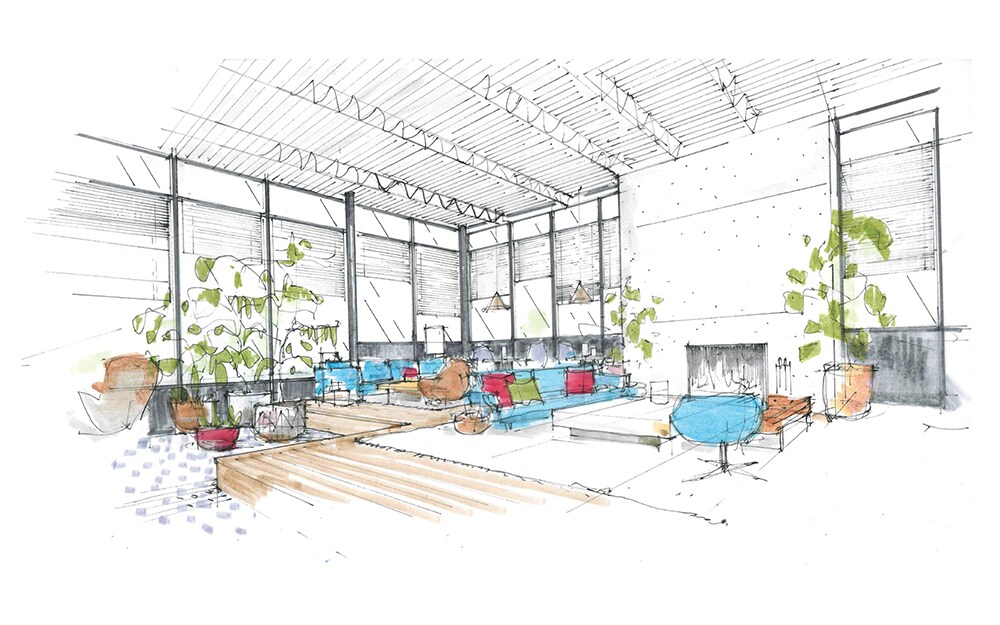 The first and flagship property of this new hotel brand will land in Washington DC this summer. The premise is to ‘merge hospitality with progressive social change,’ and create a place that is a hotel, media platform, co-working members club and wellness centre all at once. Attend the speaker series on political topics like climate change to really check in to the full experience. Rumour has it the agenda is anti-Trump, and that liberal cities Seattle and San Francisco are next on the agenda.

• The best hotels in Washington DC The lobby of citizenM’s forthcoming Lower East Side hotel exudes fun from the off. Loads of white lanterns hang from the ceiling, Vitra chairs and soft furnishings bring bright pops of colour, and the walls are full of shelves with funky objects and art. Rooms feel more pared back and functional in comparison, but include excellent features like wall-to-wall windows to maximise views, rain showers and extra large king-sized beds.

• The best hotels in New York 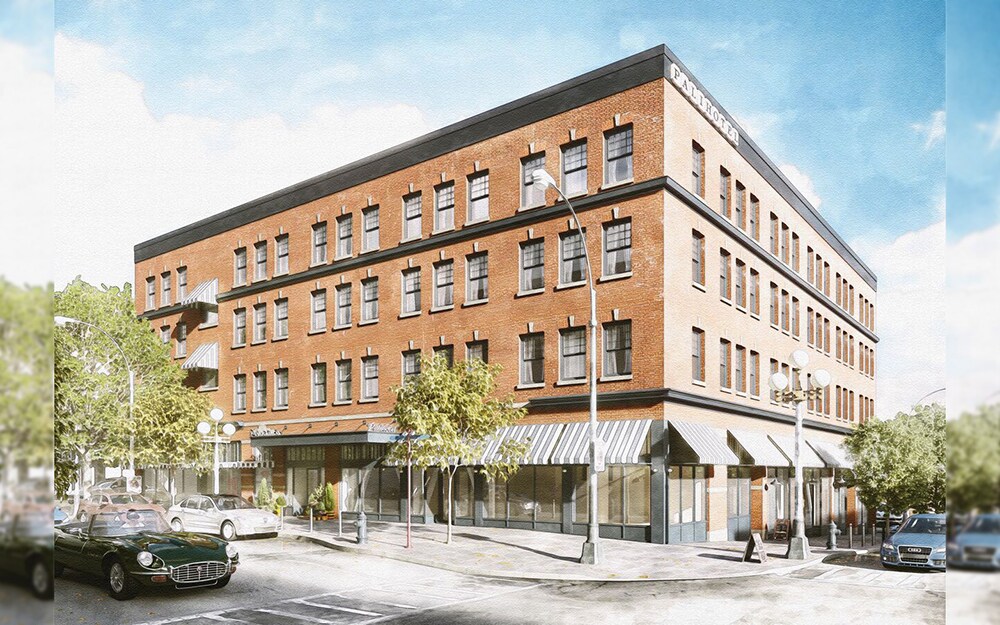 If you want an idea of how trendy this hotel will be, just know that it’s going to have Smeg fridges in the rooms. Design throughout the historic building will be fun and contemporary, with mismatched patterns and eclectic furniture. It’s also going to have a restaurant (The Hart and The Hunter) with food inspired by the deep south; dishes are likely to include butter biscuits with pimento cheese, and New Orleans-style barbecue shrimp.

• The best hotels in Seattle The interior design of this 98-room hotel is inspired by learning and will be based around the themes of gospel music, science, mathematics, art and literature. As for location – and given the theming – it’s in good company. The hotel is found in the South Side neighbourhood of the lush Hyde Park, which is also home to the University of Chicago and the Museum of Science and Industry. Even the entry-level rooms are generously sized, and all come with seating areas with corner sofas, colourful art and large marble bathrooms.

• The best boutique hotels in Chiacago Contemporary art will be at the core of 21C Museum Hotel in Kansas City, much like the arty hotel group’s other outposts across the United States. The free museum inside has 6,200 square feet of exhibition space, and will present a rotating cycle of exhibitions focused on the art of the 21st century. Get to know some of our generation’s most powerful artists before checking in to one of the 120 rooms. All have high ceilings, big windows and, of course, original artwork.

• The best hotels in Kansas City 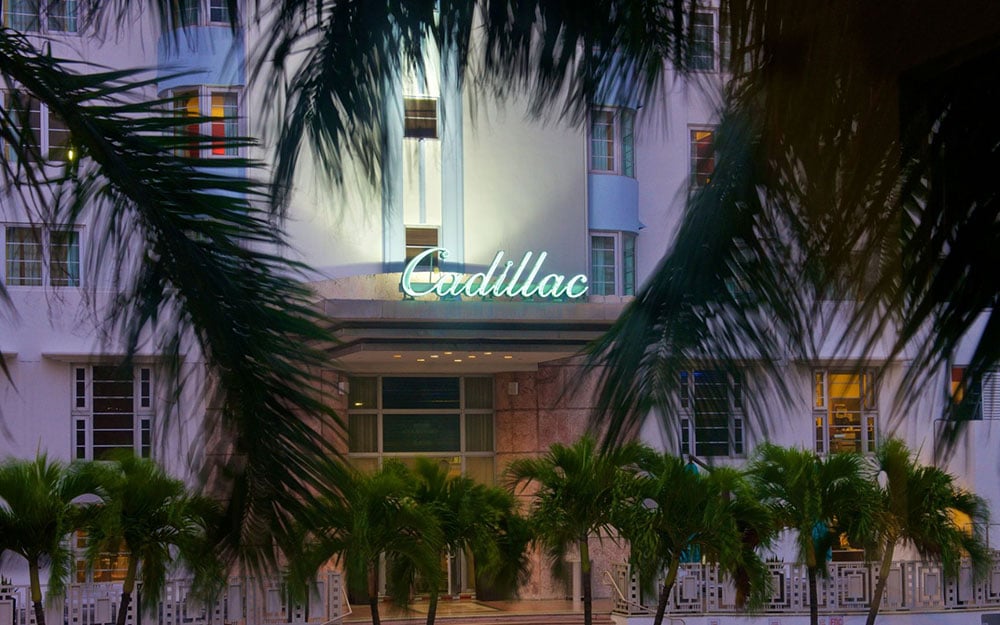 A neon ‘Cadillac’ sign out front screams of old-school American motels, but inside it’s going to be all clean white lines, sleek design and chic vibes. Rooms are done up in soothing blue and white hues, and there’s a beachfront bar and a classy Italian restaurant. An outdoor pool surrounded by palm trees will be the spot for lounging, and will have its own ice-cream cart serving the hotel’s signature shaved ices.

• The best hotels in Miami Beach 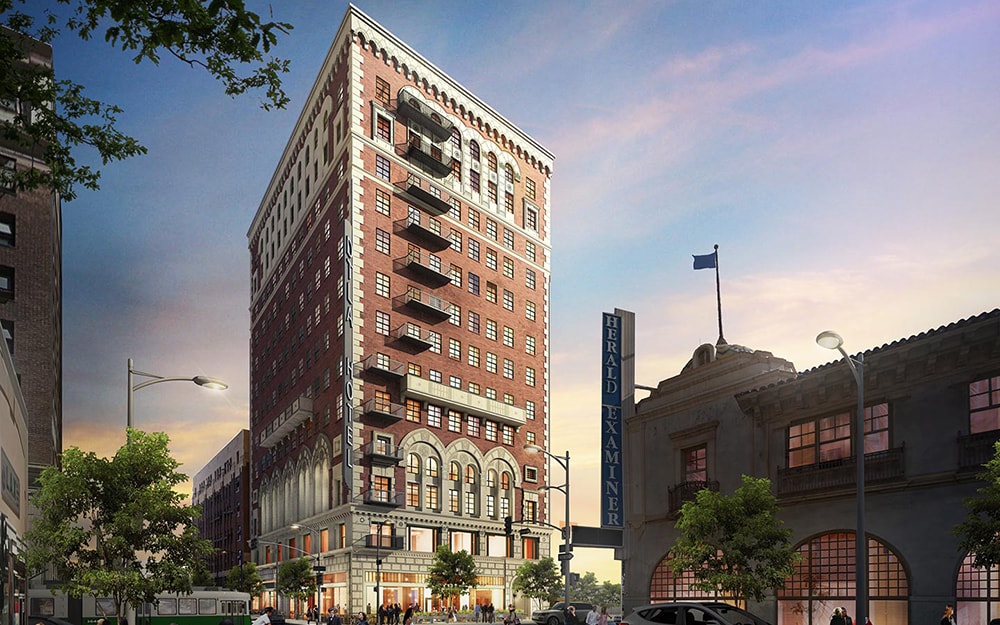 If the first Proper Hotel in San Francisco is anything to go by, this Downtown Los Angeles incarnation will be a riot of colours, patterns and oh-so-Instagrammable backdrops. It’s set in a historic Renaissance Revival-style building on the corner of Broadway and 11th, and will house 148 guest rooms, two ground-floor restaurants, a gym, two presidential suites and a rooftop restaurant, bar and pool. iPhones at the ready.